A Revealing Testimony on Radio

John Weeks, is a member of the Upper Ferntree Gully Seventh-day Adventist Church, as well as co-presenter of the radio program ‘The Good Life’, broadcast on the local community radio station 3MDR 97.1 FM, located in the township of Upwey, in the Dandenong Ranges (Victoria).  John became a convert to the 7th Day Adventist Church several years ago and now speaks to various groups about his beliefs.

John was invited by Ann Creber, producer/presenter of the Good Life radio program, to share his personal story on the program by telling listeners about his conversion, his beliefs and those of the Seventh-day Adventist Church.

You can listen to the radio interview by clicking on the ‘Microphone’ image. 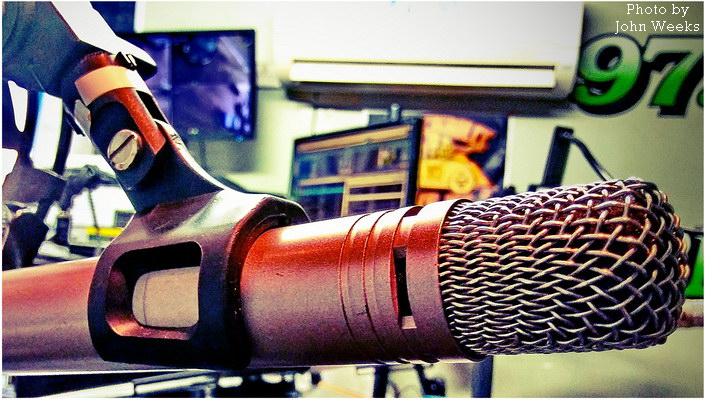 “Hi John. Just listened to your testimony.  Absolutely fascinating!  So many instances of God’s direct leading in your life.  May He continue to lead and may you continue to follow!” – Pastor Paul Kotanko

“I heard some of that interview while driving, John. I was particularly interested in the epiphanous moments you described, and the cathartic emotional releases that followed. I knew what you were talking about, as I’ve had similar experiences in an ashram/Vipassana meditation retreats, and also counselling those with terminal illness in palliative care. I appreciated you sharing experiences that are acutely personal, and difficult to articulate due to their transcendent nature. I’ve shared mine with close friends/small groups, but talking about them on air to a wide audience is something else again. :)” – Bruce W.

“John, Wow… what a testimony! If your testimony doesn’t at least invoke some degree of interest among seekers, I don’t know what would. It is indeed very surprising that you are allowed such a long rein on public radio. But our God works in mysterious ways. It also sounds like you are also into apologetics. I have a very keen interest in apologetics as I know our adversary has put together a militaristic atheistic war front to re-convert believers. People like Sam Harris, Christopher Hitchens, Richard Dawkins, and Peter Singer – seem to be the forerunners of this war machine. On our side are people like John Lennox, William Craig, Frank Turek, Norm Geisler, Sean & Josh McDowell, and as you mentioned Les Strobel, all of whom I follow closely and read their books. Uncanny but true, I have a similar journey to Christ and I can say God has dramatically woken me up as I was a stubborn “intellectual” who refused to give in. So He had to do something very drastic to humble and tame me and I praise our Lord for His long-suffering – He won.” – Steven W.

“Oh John, I didn’t go to church today but found your interview. What an amazing story of God’s leading and your acceptance of His love. May God continue to bless you as you faithfully minister for Him. Just a thought: perhaps you could present this testimony as a sermon sometime.” … Elayne

“I find that in life it is amazing how God seems to place us in the right place at the right time in order to receive all that he has to give us, especially relating to what he has done for us in Christ upon the cross of Calvary in dying for our sins, and so granting us the gift of eternal life. There is a sense in which God “seeks us out” in life, and never ceases to place people and situations before us, in order that we might receive from him his most extraordinary gift in life, focused in His Son, the Lord Jesus Christ. Your testimony about the person you saw at Belgrave who told you that the Bible was true, I am prepared to say was one of God’s angels. The Bible is full of angels who really are God’s divine messengers, and sometimes we are privileged to actually encounter one during our lifetime. Even Hebrews 13:2 says: “Do not be forgetful to offer hospitality, for in this way, some have actually entertained angels unawares….” … a local Baptist Minister

Oh John, I didn't go to church today but found your interview. What an amazing story of God's leading and your acceptance of His love. May God continue to bless you as you faithfully minister for Him. Just a thought: perhaps you could present this testimony as a sermon sometime.